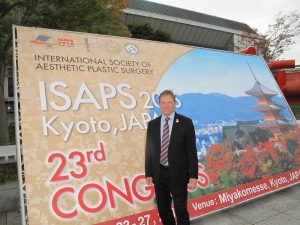 Dr. Mark Jewell presented a scientific research study that he conducted along with co-authors, Michael Edwards, M.D. and Diane Murphy, MBA at the 23rd Congress of ISAPS in Kyoto, Japan. This study reviewed the lactation outcomes of approximately 6000 women who had either saline or silicone gel breast implants that attempted to breast feed their babies. Lactation outcome data was compared to patient’s baseline history of pregnancies and lactation before and after breast augmentation along with data from women who had never undergone breast augmentation.

The data from the >5 years of follow up indicates that women with either the inframammary or periareolar incisions for the augmentation can breastfeed normally and not have a greater incidence of lactation-related issues than a normal population of women who do not have breast implants. Approximately 94% of infants were able to suckle normally. Additionally, women who had pregnancies/lactation before their breast augmentation did not experience a greater incidence of lactation-related problems.

This is the second largest population study of lactation following breast augmentation that has concluded that there is no scientific evidence that shows that the various types of breast implants (round saline, round silicone gel, form-stable anatomically shaped) interfere with the process of lactation and breastfeeding.